Developed for distributors of industrial gases & welding supplies including both cylinder and bulk gases. TIMS Software provides a premium end-to-end software solution for comprehensive management of your entire operation.

Three Generations of Family and Technology

very family has stories, including CU customers. Read their stories about family, business and how technology has changed over the years, and how embracing new generations—of family and technology—has paid off.

Glenn Earl Bliss started out with General Distributing and became president of the company shortly after it opened in Great Falls back in 1948. “We sold everything from paint and tires to welding supplies,” says Eric Bliss of his grandfather’s business.

By the mid-1970’s, General Distributing had established itself in the cylinders/gas industry and saw a second generation of the Bliss family come aboard. Glenn F. Bliss joined his father in the family business, while his sons, Glenn W., Eric and Brian began to get a feel for the family business in years following as well.

“I remember being in junior high and going to work after school to shred paper,” tells Eric Bliss, Vice President, of General Distributing. “I continued to work in the family business throughout junior high and high school.” 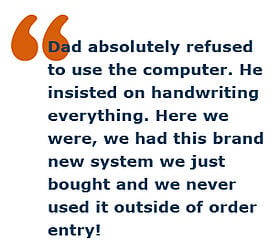 In 1985, General Distributing implemented a new technology to run the business—TIMS Software. Eric recalls the time they began using it, “By 1988, we were managing everything from our fill plant to inside sales. We were extremely busy, but Dad absolutely refused to use the computer. He insisted on handwriting everything. Here we were, we had this brand new system we just bought and we never used it outside of order entry!”

It wasn’t really until 1999, when Eric returned from working at Boeing, that General Distributing started to truly leverage the technology they had in place. “I was doing cost analysis at Boeing and technology was an essential component of my job. I took advantage of every learning opportunity I could while I was there.

When I returned to Montana, we were using all ‘dumb terminals’ (VT terminals) at the business. It was shortly after returning that we purchased some personal computers—that was definitely a step in the right direction. 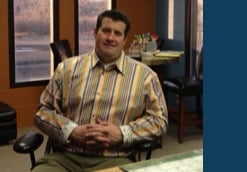 Then, we started having conversations about how we could apply what I learned at Boeing, in regards to efficiency and technology, to our business. If we could be successful in implementing those practices, the opportunities in front of us were huge.”

And there were certainly opportunities that began to unfold. The benefits of leveraging that technology in General Distributing’s operations were quickly apparent. 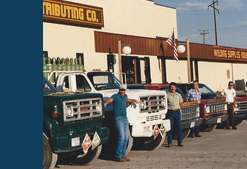 The General Distributing team believes that ‘value-added services’ have helped the company be successful. ‘Value-added’ is the belief that the individuals at General Distributing rise above and go beyond standard customer expectations; that the things they do to help customers succeed and be profitable...matter.

New generations of technology help take that mission one step further so that upcoming generations of the Bliss family can be there to see this success continue...for their customers, their team and their business.